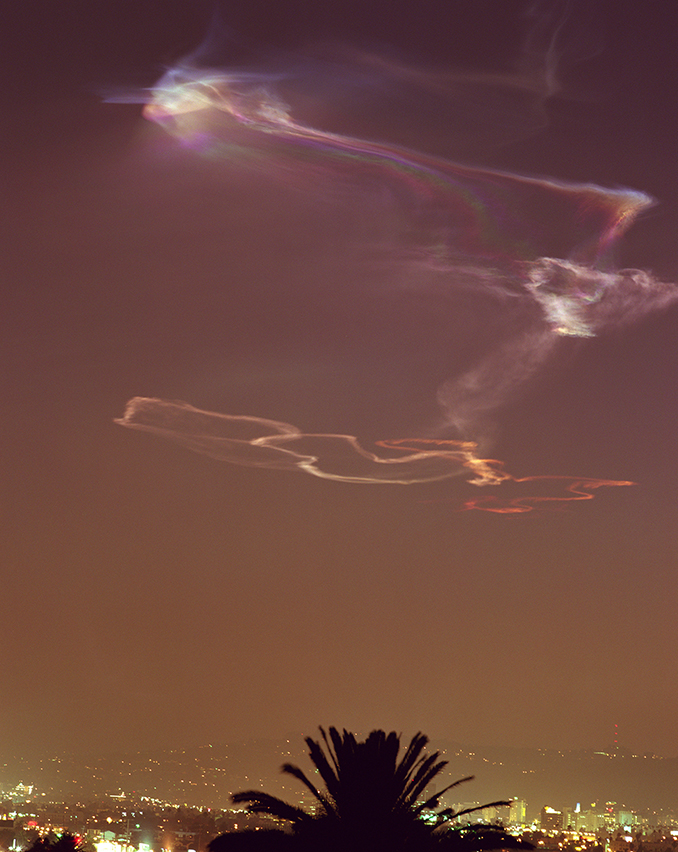 Over the past two decades, Connie Samaras has used photography and video to represent particular built environments she characterizes as “speculative landscapes” against the backdrop of daily life. She explores the aspirations and anxieties of the imagined future – how the US dreams itself – along with the psychological and social dislocation within the everyday.

Samaras reveals the paradoxes of these surreal environments – vast, impersonal constructions such as the cities of Las Vegas and Dubai and the remote, scientific colonies of the South Pole or Spaceport America, an emerging corporate space launch facility in the remote desert of New Mexico. Her objective is to unhinge the speculative from the normative and thus illuminate the multiple timelines and social possibilities – the rich subjectivity – in any given moment of daily life. Works from six completed series will be presented – Angelic States-Event Sequence, After the American Century, V.A.L.I.S. (Vast Action Living Intelligence System), and Spaceport America – as well as works from the ongoing series Surface Events. Collectively, the works in Tales of Tomorrow address the social and economic construction of “future imaginaries” and the variable membrane between fiction and real world.

In addition to featuring works from the six series noted above, this survey exhibition debuts Edge of Twilight, new photography from the first part of an expansive trilogy that launches a conceptual turn in Samaras’ work. Historically the artist’s projects, such as those shot in Dubai and South Pole, depict the future imaginaries of global capitalism, or how the future is held out as a singular probability. Edge of Twilight looks at humble and everyday future imaginaries inflected by social change movements, in which the future is seen as a series of shifting possibilities. Featuring photographs of homes in a women’s retirement RV park in the desert of the U.S. southwest, Edge of Twilight borrows from the genres of time travel and tourism literature as way to reconsider the intersecting complexity of marginalized, cross-generational personal experience and political histories. The long exposures of the photographs and the vapor light under which they were shot create an enigmatic environment in which black skies and yellow RVs are punctuated by the vivid colors of rainbow flags.

Tales of Tomorrow is the largest and most significant exhibition of Connie Samaras’ work to date. The exhibition is accompanied by a full-color, 108-page, hard-cover catalogue edited and with an introduction by exhibition curator Irene Tsatsos and texts by Charlotte Cotton, Lisa E. Bloom, Juli Carson, Ken Gonzalez-Day, Alice Echols, Kate Flint, Julie Lazar, Catherine Opie, Kavita Philip, Claire Phillips, Anna Joy Springer, Tyler Stallings, Roberto Tejada, and Matias Viegener. The catalogue was designed by Lorraine Wild of Green Dragon Office and is being distributed by D.A.P. The exhibition and publication have been supported by The Andy Warhol Foundation for the Visual Arts and the Pasadena Art Alliance. In addition, the artist received support from Creative Capital for the production of Edge of Twilight.

About the Artist
Connie Samaras was born in Albuquerque, New Mexico in 1950. She has exhibited for over twenty-five years, mounting solo shows at venues such as the California Museum of Photography, the San Francisco Art Institute, Detroit Art Institute, School of the Museum of Fine Arts in Boston, Los Angeles Contemporary Exhibitions, and Franklin Furnace. A full professor at University of California/Irvine, Samaras has received more than four-dozen research and production grants from foundations such as the California Community Foundation, the National Science Foundation, Anonymous Was A Woman, Art Matters, Banff, and the National Endowment for the Arts. In addition to an extensive record of exhibitions and lectures, Samaras has published feminist critiques of the culture wars in the late ‘80s/early ‘90s (New Art Examiner, ArtForum, New York Law School Review); edited texts on technology and the cultural production of death (Terminals); and written experimental fiction (Whitewalls, Central Park) and critical narrative (The Scholar and the Feminist Online, Remix: Santiago Bose).

This exhibition and publication supported by The Andy Warhol Foundation for the Visual Arts and the Pasadena Art Alliance. In addition, the artist received support from Creative Capital for the production of the Edge of Twilight series.