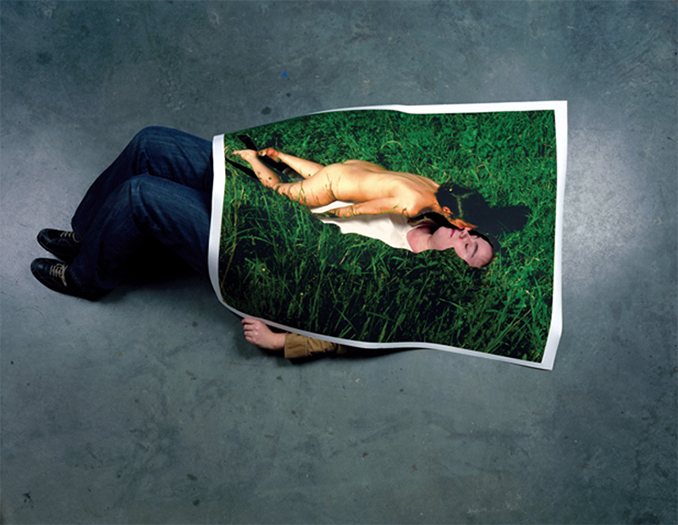 Contested Destination is an evocative look at ideas of precedents and homage, an alternatively organized matrix of time, and what Donna Haraway calls “reinscribed history,” all through the lens of artworks that evoke performance and performativity. The show includes: photographs by Gina Osterloh from All of Our Edges, a series that depicts an obscured figure in a monochromatic environment and reflects the tension between blending into and remaining distinct from an environment or an external presence; a series of photographs entitled Fool’s Gold (from the Elephant series) by Betsy Lin Seder, which lavishly represent that glittering mineral while evoking feelings of ambiguity, aspiration, and loss; I’ll Keep Merapi’s Lava Away from the People, a video by Jeannie Simms that features women teaching or mimicking the dance-like movements of one another; the work is from her Readymaids series, which consists of videos made collaboratively with women inside a maid-training agency in Java, Indonesia; video by Gabie Strong, entitled Memories of the Space Age, which shows a rocket being launched in slow motion; the title of the work distorts a sense of time by implying nostalgia for something that arguably has not happened yet, and the imagery literally slows down something as its accelerating; a photograph of Kristine Thompson integrating – or ingratiating – herself into a photograph of artist Ana Mendieta as part of a series of works in which she responds to the work of deceased artists who addressed issues of self-portraiture, sentiment, and the relationship of their bodies to specific sites; drawings by Carrie Yury from a series entitled (My) Performance Anxiety, in which the artist addresses her conflicted relationship to performance art through a series of drawings of famous feminist performance art works, revised by having placed animal masks on their faces.