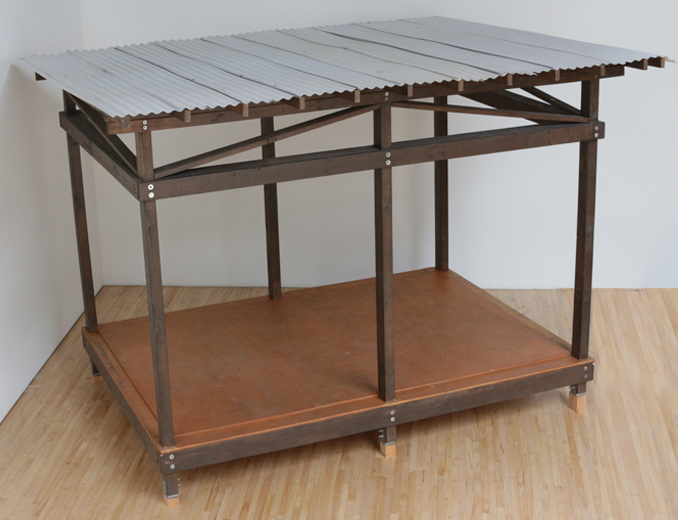 The Fifth Wall is inspired by multiple sources: the unique architecture of the Armory’s Raymond Avenue building; German modernist theater practitioner Bertolt Brecht’s notion of dialectical theater, including the breakdown of the “fourth wall” and the emphasis of function over the binary considerations of form and content; and artwork that challenges the authority of a fixed point of view and suggests a deeper form of reciprocal engagement; and the Armory’s 25th year of programming.

The Fifth Wall consists of works on paper, sculpture, painting, video, and photography by seven artists from Los Angeles, rural Connecticut, Warsaw, and Berlin. Each has created works that take into consideration alternate, or “wrong” points of view or perspectives. Alice Könitz’s Los Angeles Museum of Art, a c. 13’ x 10’ x 10’ outdoor sculpture that also functions as a museum, will be moved from the driveway of her Eagle Rock studio and re-installed in the Armory’s Caldwell Gallery, where it will provide a literal and metaphorical platform for performances to be staged during the run of the exhibition. Evan Holloway’s delicate line drawings of the sides of epic steel sculptures by David Smith, and Marco Rios’s ‘repaintings’ in oil on canvas of his childhood abstractions, consider artworks from unexpected spatial or temporal disruptions. Interior spaces are reconsidered by Corinna Schnitt, who has created a video that shows household and domestic farm animals slowly being introduced into a living room and the mayhem that ensues, and Farrah Karapetian, who uses photograms to render images of architectural interiors in three dimensions. Our physical senses of sight and sound are challenged by Tom Friedman, who confronts basic assumptions about daily life through unexpected use of familiar materials, and Artur Żmijewski, a visual artist and filmmaker who has created lyrical audio/visual works with individuals who are hearing impaired.

Drawing from Brecht’s theatrical practice, the show invites critical self-reflectivity in the viewer. The works in this exhibition “show what is shown in the showing,” to borrow Brecht’s phrasing. The viewer is made aware of ideas of labor, point of view, and architectural and social constructs that affect their perception of a piece of work. This show seeks to de-familiarize viewers with their own experience of art, and to produce a feeling of strangeness toward what would otherwise have been considered only in a canonical context. Brecht’s word for this was the Verfremdungseffekt, or “alienation effect” which, when applied to art, can offer new content in even the most familiar contexts. Just as Brecht wanted his audience to remain aware of the falsity of the spectacle, The Fifth Wall seeks to remind the viewer of the fallacy of point of view. It provides familiarity of subject matter with an estrangement to the object’s original context.