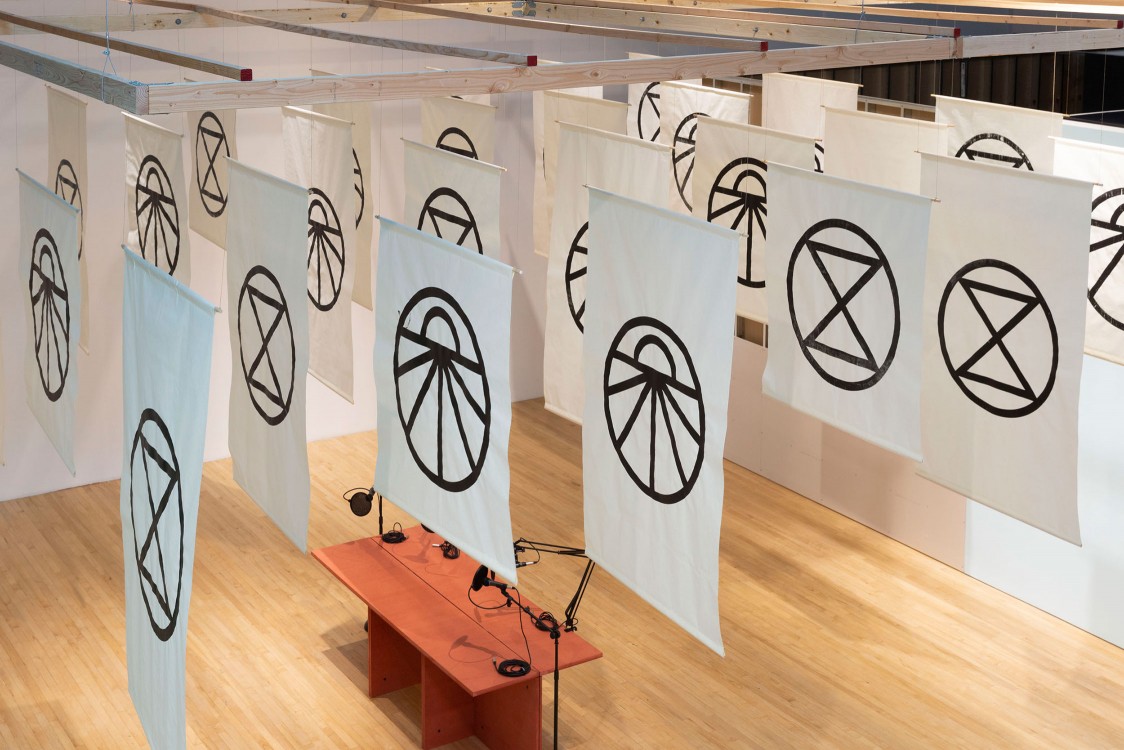 Please join The Winter Office for the last in a series of public conversations at the Armory on non-ideal theories of art, collaborative design, and spatial justice in the 21st century city. In the center of The Winter Office's current Armory exhibition is a working Podcast studio that functions as a public speaking and listening environment where new, urgent models for dwelling and housing can be imagined in conversation. These public conversations will be recorded and produced as a podcast series entitled The Social Territories of a Warming World. This conversation series is moderated by The Winter Office, in collaboration with the Armory and 18th Street Arts Center in Santa Monica, where a second version of this Podcast studio will be installed for additional conversation on August 15, August 31, September 5, and September 12.

Members from Sunrise Movement LA and Extinction Rebellion LA (XRLA) will gather under the rice paper flags installed in the Winter Office exhibition to talk about their movements. Their conversation will touch on strategies for fighting the climate crisis, examine Sunrise and Extinction Rebellion’s ongoing actions and campaigns, and discuss building a movement large enough to win back our future from the brink of extinction.

From the perspective of each climate change organization, members of XRLA and Sunrise LA will speak further about the possibility of convergence between organisations and other emerging climate crisis movements. By talking about working together to alter the popular imagination of "movement" on local and global scales, this discussion will question if involving emerging climate change moments in a new public perspective could help broaden the understanding of the investment in these movements—not only in realistic terms, on diverging and converging local and global scales.

About Sunrise
Sunrise is a movement to stop climate change and create millions of good jobs in the process. “We're building an army of young people to make climate change an urgent priority across America, end the corrupting influence of fossil fuel executives on our politics, and elect leaders who stand up for the health and wellbeing of all people”

About The Social Territories of a Warming World
Organized and moderated by The Winter Office as a public speaking environment where urgent paradigms and contexts emerging from the climate crisis will be explored, these conversations, which are open to everyone, will be recorded and produced as a podcast series and made available online soon after. This conversation platform is a special program of the exhibition Non-Perfect Dwelling by The Winter Office, and it is produced in collaboration with The Armory Center for the Arts and 18th Street Arts Center, where other conversation events will also be recorded and open to the public.

Image: Flags (SUNRISE AND EXTINCTION REBELLION MOVEMENTS) installation by the WINTER OFFICE, 2019. Photo by Ian Byers-Gamber, courtesy of Armory Center for the Arts.