Facing the Sublime in Water, CA 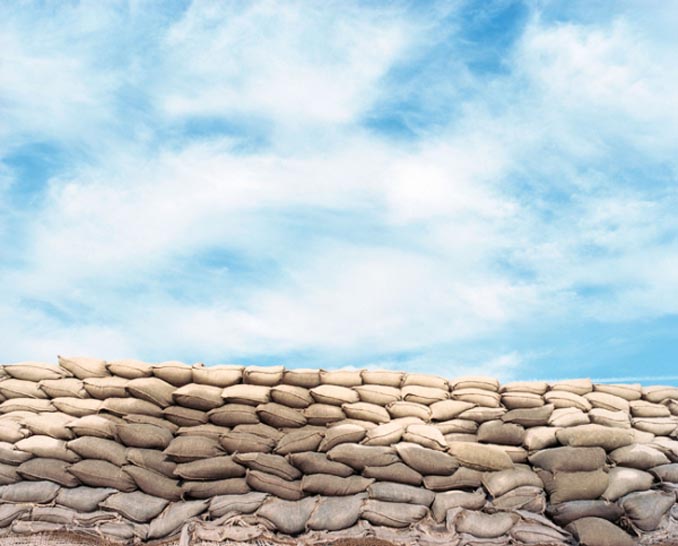 Twenty years or so ago, well before the ongoing reclamation efforts were underway, a friend, who was sitting on the concrete banks of the river, spotted a full-size kitchen refrigerator bobbing along, "as lightly," he said, "as a styrofoam cup." Water easily carries car-sized boulders over miles and moves acres of mud across slopes. It evaporates, leaks, and erodes. Despite our best efforts to contain it and our constant need for it, the nature of water is to move, wherever it is. If a power outage were to stop the constant pumping of water, the subways of Manhattan would be fully submerged within twelve hours. As the fauna growing through the cracks of the concrete bed of the Los Angeles River show, water ultimately operates outside our control.

The utopic locale of "Water, CA" in the show's title evokes a hypothetical place, a kind of semi-plausible environmental nirvana where human needs are met humanely. Water itself is, of course, a highly contested resource here in California and globally. The monetization of water – an essential primal element, like air – remains a fundamental challenge to notions of fairness and humanity around the world, just as it did in the earliest days of the historic water wars of this state. The notoriety and the tragedy of various engineering feats, such as the paving of the Los Angeles River and the failure of the breach wall in New Orleans, reveal our social ambitions as well as our arrogance. Yet our drive to harness the power of water is what makes us human. The innovation and the urgency of the environmental movement and the irrefutable need for a sustainable, sane, and ethical approach to meeting basic human needs around the globe are characterized by very real constraints, palpable desperation, and persistent optimism.

Facing the Sublime in Water, CA offers metaphors – both explicit and implicit – for the timeless idea that constraints and desperation can provide constructive applications and outcomes – unexpected or not – in a variety of social, political, and personal contexts. Whether accidentally or on purpose, constraints can make an idea, an action, or an object fluid. That conflict is at the core of the content of this show.

The idea for Facing the Sublime in Water, CA began as a response to another's fascination with the Salton Sea – a geographic anomaly that was created by an agricultural blunder, is California's largest lake, and is so immense that it is visible from space. The Salton Sea inspired artists and Nicole Antebi and Enid Baxter Blader to explore water issues and create a project entitled Water, CA, a website that includes images and texts Antebi and Blader gathered from artists, environmentalists, and historians, that address the history and representation of water and water use through the lens of artistic production. The exhibition checklist of Facing the Sublime in Water, CA will be added as a link on http://www.waterca.net – likewise, the website itself is an item on the exhibition checklist, is to be included in the exhibition itself (along with drawings, photographs, texts, books, videos, and other elements represented on the web site that will be selected and organized by Antebi and Blader), and will be listed accordingly in the accompanying catalogue. The elliptical relationship between these platforms – the website, the exhibition, and the exhibition catalogue – reflects the fluid constraints at the center of the show.

waterca.net programs at Armory and Beyond
All programs are free and open to the public

Cynthia Hooper
Lecture and screening
Friday, October 19 at 7pm
Armory Center for the Arts
Discussion and screening of three short videos about the artificial wetlands of the Colorado River Delta.

Douglas McCulloh
Slide lecture
Thursday, November 1 at 7pm
Armory Center for the Arts
Discussion about the complex legal and media struggle over Mono Lake, which was seminal in the history of water rights because the principle jus publicum triumphed — the idea that some resources are so precious that they defy private ownership and belong instead to everyone, known as the Public Trust Doctrine.

Sant Khalsa
A River Runs Through Me
Slide lecture
Friday, November 2 at 7pm
Armory Center for the Arts
Artist will discuss her three-decade interest in the Santa Ana River; her ongoing explorations into the meanings, mythologies, and metaphors associated with water; and the photographic and installation works that have resulted from her creative research.

Mike Plante
Screening
Saturday, December 8 at 7:30
Armory Center for the Arts
A series of short films by Mike Plante.

Funding for Facing the Sublime in Water, CA provided by the National Endowment for the Arts, The Steven B. and Kelly Sutherlin McLeod Family Foundation, Pasadena Water & Power, and Helen N. Lewis and the Estate of Marvin B. Meyer. Image courtesy Katie Shapiro from her Malibu Sandbags series.